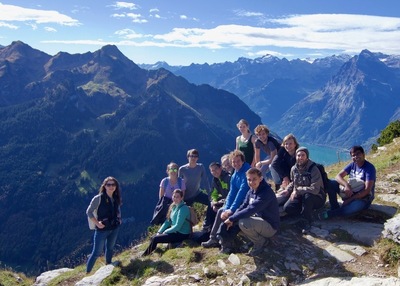 High above Lake Lucerne, the three-day CLS retreat took place at Stoos, a magnificent place in the heart of Central Switzerland.

Reaching the mountain village of Stoos was already an adventure in itself: The panoramic view on our way up with the funicular was breathtaking and we soon realized that we were going to spend the next three days in one of Switzerland’s most beautiful locations. The charming nature at the foot of Fronalpstock was complemented by our hotel’s fully equipped wellness facilities.

For the talks of the first day, however, we ascended even higher, to the restaurant at the peak of Fronalpstock. The 360-degree panoramic view competed for our attention with the interesting talks from a wide variety of interdisciplinary topics. CLS fellows from both ETH Zurich and Max Planck Institute for Intelligent Systems (MPI) presented their most recent work in the field of Machine Learning and Statistics, e.g. on topics such as Generative Adversarial Networks (GANs) and nonlinear optimisation. Prof. Katherine Kuchenbecker, director at MPI for Intelligent Systems, gave the first keynote talk of the retreat on the future of haptic intelligence and the reasons why it is important to endow robots with the sense of touch. Right after her talk, we were rewarded with a fantastic sunset in all shades of yellow, red and violet. Descending by chairlift back to Stoos after dinner through the dark of the night rounded off the first day.

In the morning of the second day, some of the fellows tackled the famous ridge hike from Klingenstock to Fronalpstock. We enjoyed the mild autumn weather and the marvellous mountain panorama. Others decided to explore the area with their bikes. After lunch, CLS fellows continued with robotics talks. We heard about how to learn from spiders, as well as whether we can build hugging robots. Finally, the second day ended with another keynote address given by Prof. David Steurer from ETH. His talk focused on theoretical computer science, particularly on the use of sum-of-squares to learn algorithms. The night of the second day found many of us playing a game called werewolves until very late.

Even though some of us did not get enough sleep, the talks of the last day of our retreat captured all our attention: They revolved around computer vision projects, such as 3D reconstructions on mobile devices and video segmentation. After the end of the comprehensive scientific program, many participants decided either to indulge themselves in the hotel’s wellness facilities or sit outside and enjoy the fascinating view – until we finally had to travel back to Tübingen, Stuttgart, and Zürich.