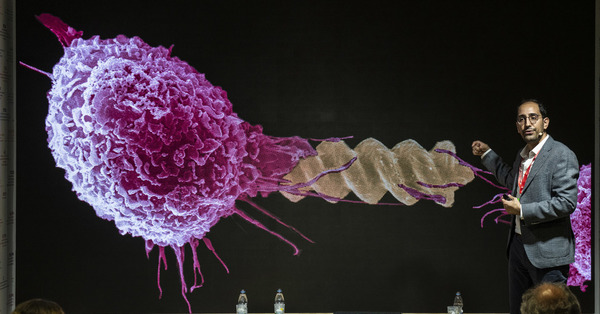 During July – October 2021, the Pop-up House of Switzerland in central Stuttgart has invited the general public to a program of workshops, talks and exhibitions on the topics of sustainability and innovation. On September 8, Dr. Hakan Ceylan contributed as a speaker on the topic “Rethinking Living: It’s a Small World After All”.

The <<Pop-up House of Switzerland>> is presented by Swiss Federal Department of Foreign Affairs, and is organised by Team Switzerland! comprised of Präsenz Schweiz, Switzerland Tourism and Switzerland Global Enterprise. Conceived as a roadshow, the Stuttgart site is the first stop, with locations in France, Italy and other destinations being planned. The program in Stuttgart is supported by many Swiss and German partners including ETH Zurich and MPI-IS.

As one of the live evening events, Dr. Hakan Ceylan from the Physical Intelligence Department at MPI-IS joined researcher Prof. Dr. Simone Schürle, head of the Responsive Biomedical Systems Lab, ETH Zurich, for a panel discussion. The audience could hear about the potential of soft-bodied, wireless, miniature robots in the context of drug delivery, stem-cell treatment, and other medical functions, as well as learning how synthetic biology is repurposing bacteria as living microrobots in the fight against cancer, among other applications. Catch up with the event here: https://www.youtube.com/watch?v=iEjnj-N2YBU

Finally, a group of MPI-IS researchers attended a live event on “The Future of Aerial Robotics” on October 12, featuring researchers Prof. Dario Floreano, Director of the Laboratory of Intelligent Systems, EPFL, Lausanne and Prof. Davide Scaramuzza, Director of the Robotics and Perception Group, ETH Zürich.